The first canning factory in Eureka was established in 1895, a time when many small factories were established throughout the Midwest. In 1898 this cannery was purchased by Roger B. Dickinson and operated by his sons Eugene and Richard. The first season they had approximately 50 men packing corn, beans, and tomatoes. In 1902 Dickinson and Company made a small experimental pack of canned pumpkin. The experiment was successful, and the company added pumpkin to their annual products. In 1909 the company built an additional canning factory in Washington, Illinois, and in 1925 they built a factory in Morton, Illinois. 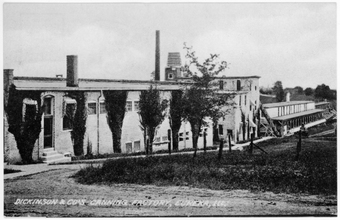 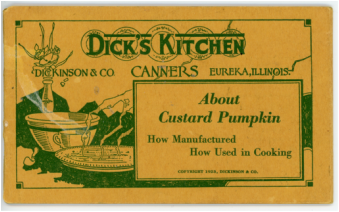 1923 Dickinson and Company Pumpkin Cookbook. Item courtesy of Eureka Public Library.
On May 1, 1929, Libby, McNeill, and Libby Company purchased all of the Dickinson and Company business holdings. Libby, McNeill, and Libby was founded in Chicago in 1869. The company began with canning meat and expanded to fruits and vegetables after the turn of the century. As part of their expansion, they purchased a number of small canneries - including the plants in Eureka, Washington, and Morton. Along with the plants, they also purchased Dickinson's pumpkin canning process. This was the start of the traditional Thanksgiving favorite - Libby's canned pumpkin. 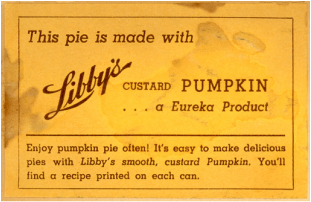 The Eureka Community Association was the starting point of the festivals. Organized in January of 1939, the association took leadership in community improvement projects as well as promoting local businesses. They decided the town needed a community celebration. As pumpkin was one of the major autumn crops being canned in Eureka, the Eureka Pumpkin Festival was born. The first festival was held on October 13 and 14, 1939. Effective regional publicity touted Eureka's position as "Pumpkin Center of the World." Attended by an estimated 10,000 people (with the town population only being about 1,700 people), the two-day event featured the crowning of the first Eureka Pumpkin Festival Queen, a football game, a large parade, band contest, stage acts, and an evening dance with music by Joe Saunders and the Nighthawks orchestra. The event also included the distribution of 7,500 free personal-sized pumpkin pies. 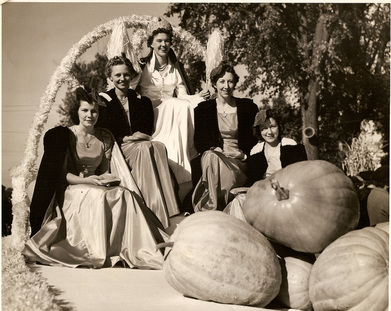 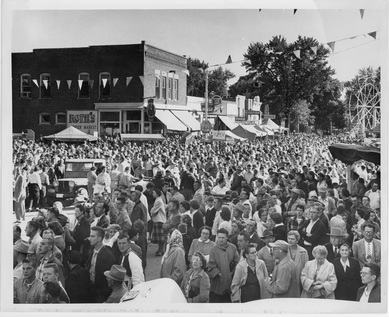 The Eureka Pumpkin Festivals were very well attended - averaging about 50,000 people after World War II. This 1957 photograph of Main Street illustrates the crowds, decorations, and carnival rides. Image courtesy of Joy Eyman.
The Eureka Pumpkin Festival was held annually at first, with festivals in 1939, 1940, and 1941. During World War II the festival was discontinued, but it resumed as an annual festival in 1946 and 1947. In 1948 Eureka's streets were being paved, so the festival became a biennial event starting in 1949.

The biggest festival year was 1947 when Eureka College alumnus and film star, Ronald "Dutch" Reagan, participated in the festival activities. Reagan arrived via train in Chillicothe, Illinois, on Friday, September 26, 1947. He was met by a contingent of festival committee representatives, Eureka Mayor Bryon Britt, and the press. On Friday evening, Reagan, along with Illinois Governor Dwight H. Green, rode on the coronation float from downtown Eureka to the high school football field. Reagan had the honor of crowning Joan Snyder as Queen, and then he did the play-by-play announcing for the first ever Pumpkin Bowl football game. On Saturday, he led the parade on horseback and then sat in the reviewing stands to watch the remainder of the parade. With regard to the parade and estimated 80,000 - 100,000 crowd, he said "This is the most amazing thing I've ever seen! The Eureka I knew was never like this!" Reagan was also presented with his own special pie - a yard in diameter. He quipped, "Some pumpkin . . this pie. What shall I do with it? Will someone wrap it up in a paper napkin for me?" 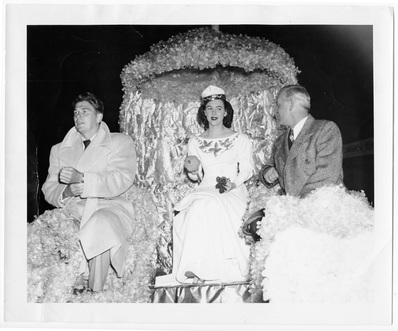 Reagan, Queen Joan Snyder, and Illinois Governor Dwight H. Green ride on a float after the coronation ceremony. Image courtesy of Woodford County Historical Society.
Another big festival year was 1959 when Eureka celebrated its centennial anniversary. The festival was expanded to three days, and floats and decorations featured historical themes. All men in town were urged to grow beards and women wore historical-style dresses, petticoats, and bonnets downtown during the festivities. 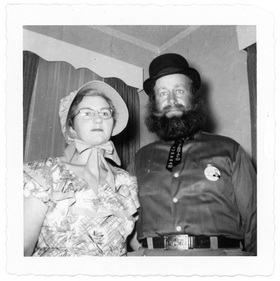 Rose and Joe Wettstein were eager participants in the 1959 Eureka Pumpkin Festival - Eureka Centennial event. Joe won the beard growing contest. His prize was an electric razor. Image courtesy of Donna Lou Wettstein.
In November of 1960 Libby, McNeill, and Libby Company closed the Eureka plant in favor of their more modern facilities in nearby Morton. The last Eureka Pumpkin Festival was held in 1961. In 1967 Morton began hosting its annual Pumpkin Festival, and it has been a successful annual September event in Morton ever since.

If you would like to see more images of the Eureka Pumpkin Festival, click on the Illinois Digital Archives link below to see all of the photographs and items shared by people and organizations for this special online collection.